We have deductions from salary on late coming and early living or not completing defined working hours in our company, can it be managed in leysha?

Yes, deductions on late coming and early living can be defined in leysha. There is an option of grace period also after which late coming can be counted. Number of late coming after which deduction should be applied can also be defined.
Some companies have flexible working hours. Time restriction is not there but defined working hours has to be completed. That can also be managed in leysha.
Example:- My office shift timings are from 10:00 am to 6:00 pm. I have given 15 minutes as a grace period for late coming. 2 late comings are allowed and after that half day will be applied for that day. So if any employee punched his attendance after 10:15 am more than twice, on the third late coming automatically his half day will be applied. 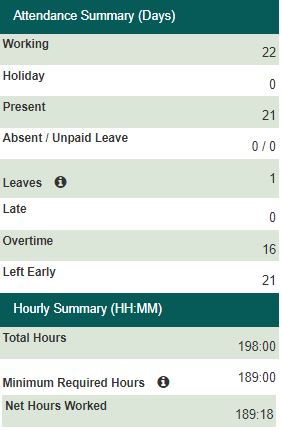 Was this answer helpful ? Yes / No